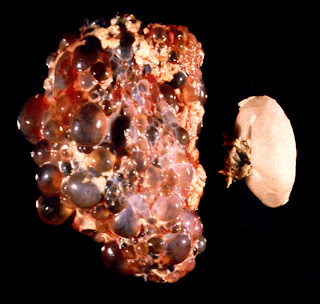 A study by Yale researchers and colleagues has uncovered a new and unexpected molecular mechanism in the development of polycystic kidney disease (PKD). The study was published online on July 28, 2013 in Nature Genetics. PKD is a life-threatening genetic disorder that causes multiple cysts to form on the kidneys — enlarging them, cutting off proper urine flow, and causing kidney failure in half of affected people by age 60. It affects more than 12 million people worldwide. Cilia are the hair-like structures on the surface of many human cells that can either move things along – dirt out of the lungs, or an egg from the ovary to the uterus – or sense the environment, such as vision in the retina or smell in the nose. Recent research has implicated defects in the sensory cilia — often caused by genetic mutations — in many human diseases, including cancer, cardiac disease, blindness, and kidney disease. In the kidney, disruption of sensory cilia can cause kidney cysts. The polycystin-1 and polycystin-2 (also known as PC1 and PC2) proteins are key players in the normal functioning of the kidneys. Earlier research has shown that when either if these proteins is lost or mutated, cysts grow in the kidneys and cause almost all cases of autosomal dominant PKD (ADPKD) in humans. Working in mice, the Yale team and colleagues found that cysts grew when the cilia were intact but lacked polycystin protein — but, surprisingly, cysts stopped growing despite the absence of polycystins when the cilia were disrupted or eliminated. The activity of this pathway, and the timing of the loss of polycystin proteins and the cilia, determined the severity of both early- and adult-onset PKD, the researchers found.
Login Or Register To Read Full Story
Login Register