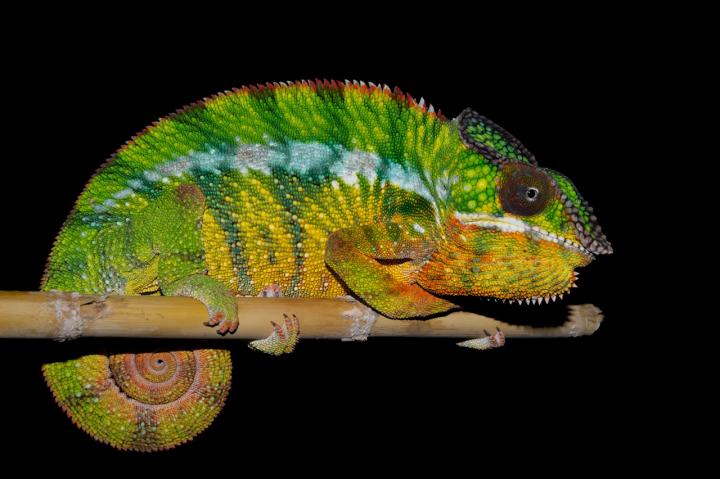 Madagascar is home to extraordinary biodiversity, but in the past few decades, the island's forests and associated biodiversity have been under greater attack than ever. Rapid deforestation is affecting the biotopes of hundreds of species, including the panther chameleon (photo, copyright Dr. Michel Milinkovitch), a species with spectacular intra-specific color variation. A new study by Dr. Michel Milinkovitch, Professor of Genetics, Evolution, and Biophysics at the University of Geneva (UNIGE), led in close collaboration with colleagues in Madagascar, reveals that this charismatic reptilian species, which is only found in Madagascar, is actually composed of eleven different species. The results of this new research appears were published online on May 24, 2015 in an open-access article in Molecular Ecology. The authors also discuss the urgent need to protect Madagascar's habitats. In collaboration with Professor Achille Raselimanana of the University of Antananarivo in Madagascar, researchers from the Department of Genetics and Evolution in the UNIGE Faculty of Sciences, led by Dr. Milinkovitch, sought to find the genetic keys behind the panther chameleon's incredible color palette. As noted, the team’s analyses, performed on site in Madagascar, revealed the presence of 11 rather than a single species. It took two expeditions led from East to West for the scientists to collect a drop of blood from each of 324 individual pather chameleons and document them through color photographs. The DNA (mitochondrial and nuclear) of each of the specimens was sequenced and analyzed in the laboratory according to the hypothesis that a chameleon's dominant color might be related to the geographic zone where it is found.
Login Or Register To Read Full Story
Login Register