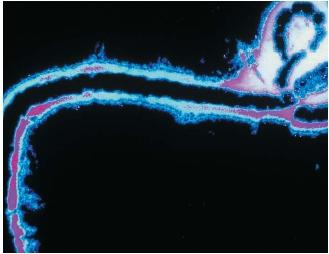 Using existing drugs that block activation of either the PI3K pathway or the CAMK2 pathway in cells, researchers have shown that Ebola virus infection can be reduced or entirely blocked in cell culture experiments. This may represent an early first step toward the first successful therapy for this deadly virus. Ebola inflicts severe and often fatal hemorrhagic fever on its victims, producing 90 percent mortality rates in some outbreaks. No vaccine exists for the virus, and it is considered a high-risk agent for bioterrorism. Natural Ebola outbreaks strike periodically, often with devastating effect; recent examples include outbreaks in Uganda in 2008 and the Democratic Republic of the Congo in 2007. "The premise for this work is that the virus is essentially nothing without a cell," said Dr. Robert Davey, lead author of the current report. "It needs to rely on many cell proteins and factors for it to replicate. The idea is that if we can suppress the expression of those cell proteins for just a short time, we can then stop the disease in its tracks." The two key cellular pathways upon which Ebola, in part, depends were identified by a combination of siRNA-based screening and a newly developed algorithm designed especially to prioritize the results of siRNA screens. After initial experiments with artificially created, lab-safe Ebola “pseudotype” viruses (i.e., viruses with the Ebola coat, but with the genetic core from another virus) gave promising results, additional experiments were carried out with real Ebola virus in a maximum containment facility (BSL4). “With the real virus in the BSL4, we found that the PI3K inhibitor dropped virus titers by 65 percent, and if we used drugs which block CAMK2 function, it was just killed — stopped dead," Dr. Davey said.
Login Or Register To Read Full Story
Login Register