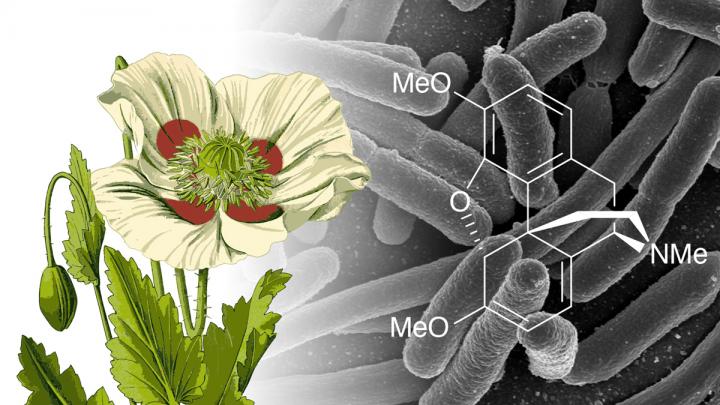 Japanese bioengineers have tweaked Escherichia coli genes so that the bacteria pump out thebaine, a morphine precursor that can be modified to make painkillers. The genetically modified E. coli produces 300 times more thebaine with minimal risk of unregulated use compared to a recently developed method involving yeast. "Morphine has a complex molecular structure; [and] because of this, the production of morphine and similar painkillers is expensive and time-consuming," said study author Fumihiko Sato, Ph.D., of Kyoto University in Japan. "But with our E. coli, we were able to yield 2.1 milligrams of thebaine in a matter of days from roughly 20 grams of sugar, as opposed to 0.0064 mg with yeast." Morphine is extracted from poppy sap in a process that results in opiates such as thebaine and codeine. Other synthetic biologists have recently engineered the yeast genome so that it produces opiate alkaloids from sugar. There were ethical concerns with this approach, however, including a risk that the pain-killing molecules could be produced easily and in unregulated ways, provided that one has access to the necessary yeast strain. With E. coli, Dr. Sato says that such production risk is insignificant. "Four strains of genetically modified E. coli are necessary to turn sugar into thebaine," explains Dr. Sato. "E. coli are more difficult to manage and require expertise in handling. This should serve as a deterrent to unregulated production." In 2011, Dr. Sato and colleagues engineered E. coli to synthesize reticuline, another morphine precursor that appears earlier in the transformation process than thebaine. In the new system, the team added genes from other bacteria and enzyme genes from opium poppies, Coptis japonica, and from the model plant Arabidopsis.
Login Or Register To Read Full Story
Login Register