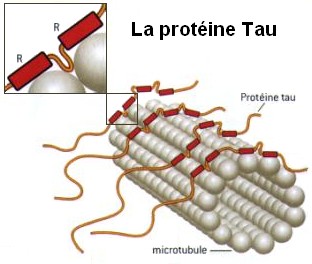 By examining more than 3,600 postmortem brains, researchers at Mayo Clinic's campuses in Jacksonville, Florida, and Rochester, Minnesota, have found that the progression of dysfunctional tau protein drives the cognitive decline and memory loss seen in Alzheimer's disease. Amyloid, the other toxic protein that characterizes Alzheimer's, builds up as dementia progresses, but is not the primary culprit, they say. The findings, published online on March 24, 2015 in an open-access aarticle in Brain, offer new and valuable information in the long and ongoing debate about the relative contribution of amyloid and tau to the development and progression of cognitive dysfunction in Alzheimer's, says the study's lead author, Melissa Murray, Ph.D., a neuroscientist at Mayo Clinic in Jacksonville. The findings also suggest that halting toxic tau should be a new focus for Alzheimer's treatment, the researchers say. "The majority of the Alzheimer's research field has really focused on amyloid over the last 25 years," Dr. Murray says. "Initially, patients who were discovered to have mutations or changes in the amyloid gene were found to have severe Alzheimer's pathology -- particularly in increased levels of amyloid. Brain scans performed over the last decade revealed that amyloid accumulated as people progressed, so most Alzheimer's models were based on amyloid toxicity. In this way, the Alzheimer's field became myopic." But researchers at the Mayo Clinic were able to simultaneously look at the evolution of amyloid and tau using neuropathologic measures. "Imagine looking at the rings of a tree -- you can identify patterns, like the changing seasons and the aging of the tree, when viewing the tree's cross-section," Dr. Murray says.
Login Or Register To Read Full Story
Login Register