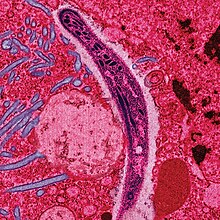 Researchers have discovered a group of chemical compounds that might one day be developed into drugs that can treat malaria infection in both the liver and the bloodstream. The study, which was published online on November 17, 2011 in Science, was led by Elizabeth A. Winzeler, Ph.D., of the Scripps Research Institute in La Jolla, California, and was partially funded by the National Institute of Allergy and Infectious Diseases (NIAID), part of the National Institutes of Health. Caused by four related parasites in the genus Plasmodium, malaria is transmitted to humans via the bite of an infected mosquito. Once the bite occurs, the parasites travel to the liver, where they usually multiply rapidly for about a week without causing symptoms. Symptoms begin when the parasites spread from the liver to the rest of the body through the bloodstream. However, the parasites can lie dormant in the liver for periods ranging from several months to years before an infected person demonstrates symptoms. Most of the malaria drugs currently in development target the symptomatic, blood stage of infection. To help achieve malaria eradication, however, a drug would ideally treat infection during both the liver and blood stages. Currently, the World Health Organization recommends only one treatment, primaquine, for the initial, liver stage of certain types of malaria infection; however, primaquine and related drugs can cause a dangerous blood disorder among patients with a genetic condition that is common in malaria-endemic regions of the world. Additionally, drug resistance has been reported, which amplifies the need to find new treatment alternatives.
Login Or Register To Read Full Story
Login Register