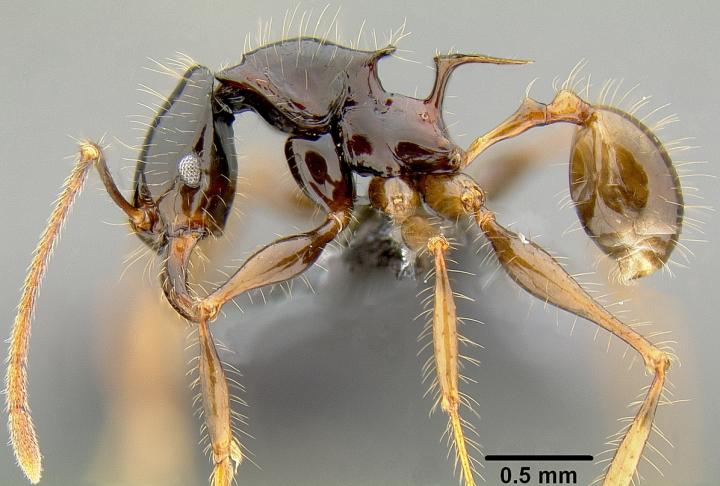 About one tenth of the world's ants are close relatives; they all belong to just one genus out of 323, called Pheidole. "If you go into any tropical forest and take a stroll, you will step on one of these ants," says Okinawa Institute of Science and Technology Graduate University's Professor Evan Economo. Pheidole fill niches in ecosystems ranging from rainforests to deserts. Yet until now, researchers have never had a global perspective of how the many species of Pheidole evolved and spread across the Earth. Dr. Economo, researchers in the Biodiversity and Biocomplexity Unit, and colleagues at the University of Michigan compared gene sequences from 300 species of Pheidole from around the world. They used these sequences to construct a tree that shows when and where each species evolved into new species. At the same time, in a parallel effort, they scoured the academic literature, museums around the world, and large databases to aggregate data on where all 1,200 or so Pheidole species live on Earth, creating a range map for each species. Their results, published online on November 26, 2014 in an open-access article in the Proceedings of the Royal Society Series B, suggest that Pheidole evolved the same way twice, once to take over the New World, and then again to take over the Old World. Dr. Economo began this project by selecting sample ants to represent each Pheidole species. The team then sequenced the DNA of the sample ants to determine genetic similarities between species, and computationally reconstruct the "family tree" of Pheidole species, providing a history of how they evolved. This may seem like a lot of effort for a group of seemingly inconsequential creatures, but in fact many ecologists use ants to better understand evolution and the terrestrial ecosystems ants inhabit.
Login Or Register To Read Full Story
Login Register