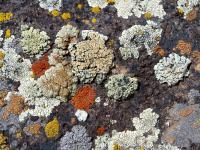 Our ability to assess biological diversity, ecosystem health, ecological interactions, and a wide range of other important processes is largely dependent on accurately recognizing species. However, identifying and describing species is not always a straightforward task. In some cases, a single species may show a high level of morphological variation, while in other cases, multiple morphologically similar species may be hidden under a single species name. Cryptic species, two or more distinct species that are erroneously classified under a single species name, are found in all major groups of living things. As an alternative to traditional morphology-based species delimitation, an international research group, including scientists from Germany, Iran, Spain, and the USA, describes five new species of lichen-forming fungi from what was traditionally considered a single species using differences in DNA sequence data. The authors state that "the effective use of genetic data appears to be essential to appropriately and practically identify natural groups in some phenotypically cryptic lichen-forming fungal lineages." The study was published online on May 9, 2013 in the open access journal MycoKeys. The scientists also provide a reference DNA sequence database for specimen identification using DNA barcoding, making specimen identification more accessible and more reliable at the same time. The application of DNA-based identification can potentially be used as a way for both specialists and nonspecialists alike to recognize species that are otherwise difficult to identify. Lichens are commonly used to monitor ecosystem health and the impact of atmospheric pollution. In addition, some lichens are potentially valuable sources of pharmaceutical products, including antibiotics, antioxidants, etc.
Login Or Register To Read Full Story
Login Register