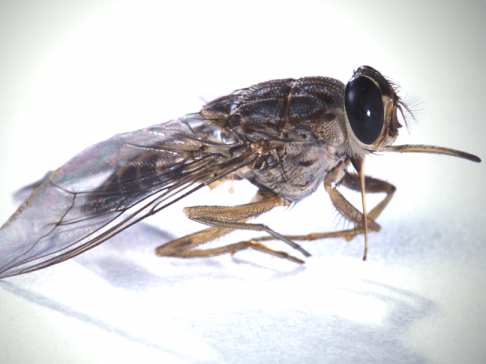 A new discovery by scientists could help combat the spread of sleeping sickness. Insights into how the parasites that cause the disease are able to communicate with one another could help limit the spread of the infection. The findings suggest that new drugs could be designed to disrupt the flow of messages sent between these infectious microorganisms. Sleeping sickness – so named because it disrupts sleep patterns – is transmitted by the bite of the tsetse fly, and more than 69 million people in Africa are at risk of infection. Untreated, it can damage the nervous system, leading to coma, organ failure, and death. During infection, the parasites – known as African trypanosomes – multiply in the bloodstream and communicate with each other by releasing a small molecule. When levels of this molecule become sufficiently high, this acts as a signal for the parasites to stop replicating and to change into a form that can be picked up by biting flies and spread. A team led by researchers at the University of Edinburgh was able to uncover key components of the parasites' messaging system. They used a technique known as gene silencing, to identify those genes that are used to respond to the communication signals and the mechanisms involved. Professor Keith Matthews, of the University of Edinburgh's School of Biological Sciences, who led the research, said: "Parasites are adept at communicating with one another to promote their survival in our bodies and ensure their spread – but by manipulating their messages, new ways to combat these infections are likely to emerge." The research, carried out in collaboration with the University of Dundee, was published online on December 15, 2013 in Nature, and funded by the Wellcome Trust.
Login Or Register To Read Full Story
Login Register