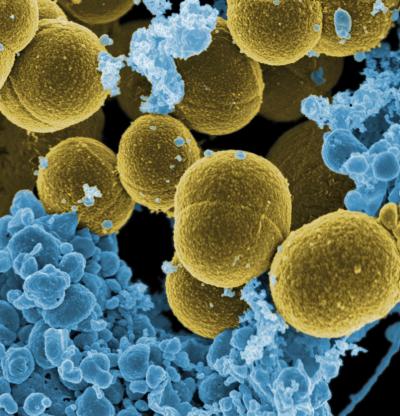 The discovery of two genes that encode copper- and sulfur-binding repressors in the hospital terror Staphylococcus aureus means two new potential avenues for controlling the increasingly drug-resistant bacterium, scientists say in the April 15, 2011 issue of the Journal of Biological Chemistry. "We need to come up with new targets for antibacterial agents," said Indiana University Bloomington biochemist Dr. David Giedroc, who led the project. "Staph is becoming more and more multi-drug resistant, and both of the systems we discovered are promising." The work was a collaboration of members of Giedroc's laboratory, and those of Vanderbilt University School of Medicine infectious disease specialist Dr. Eric Skaar, and University of Georgia chemist Dr. Robert Scott. MRSA, or multidrug-resistant Staphylococcus aureus, is the primary cause of nosocomial infections in the United States. About 350,000 infections were reported last year, about 20 percent of which resulted in fatalities, according to the Centers for Disease Control. One to two percent of the U.S. population has MRSA in their noses, a preferred colonization spot. One of the repressors the scientists discovered, CsoR (copper-sensitive operon repressor), regulates the expression of copper resistance genes, and is related to a CsoR previously discovered by the Giedroc group in Mycobacterium tuberculosis, the bacterium that causes tuberculosis in humans. When the bacterium is exposed to excess copper, the repressor binds copper (I) and falls away from the bacterial genome to which it is bound, making it possible for the copper resistance genes to be turned on.
Login Or Register To Read Full Story
Login Register