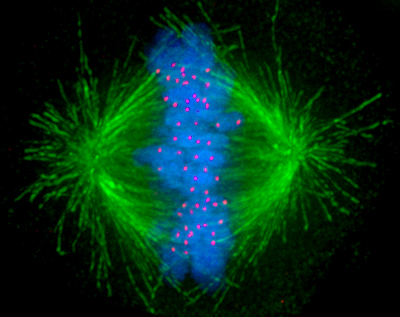 It is one of the great mysteries in biology: how does a cell neatly distribute its replicated DNA between two daughter cells? For more than a century, it has been known that DNA in the cell is comparable to a plate of spaghetti: a big jumble of intermingled strands. If a human cell wants to divide, it has to pack two meters of DNA into tidy little packages: chromosomes. This packing occurs using proteins called condensin, but how? When it comes to this question, scientists are split into two camps: the first argues that the protein works like a hook, randomly grasping somewhere in the jumble of DNA and tying it all together. The other camp thinks that the ring-shaped protein pulls the DNA inwards to create a loop. With an article published online on September 7, 2017 in Science, researchers from TU Delft, Heidelberg, and Columbia University give the “loop-extrustion camp” a significant boost: they demonstrate that condensin does indeed have the putative 'motor power' on board. The article is titled “The Condensin Complex Is a Mechanochemical Motor That Translocates Along DNA.” As early as 1882, the renowned biologist Walter Flemming recorded the process of “condensation” of DNA. Looking through a microscope, he saw how a cell neatly organized the bundles of DNA and subsequently divided them into two new cells. However, the exact details of this process have remained a mystery for more than 100 years.
Login Or Register To Read Full Story
Login Register