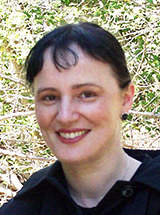 Humans possess six forms of the protein actin that perform essential functions in the body. Two in particular, β-actin and γ-actin, are nearly identical, differing only by four amino acids. Yet these near-twin proteins carry out distinct roles. A long-standing question for biologists has been, how is this possible? "It's a mystery that's been debated in the field for the past 40 years," said Anna Kashina (photo), PhD, a Professor of Biochemistry in the University of Pennsylvania School of Veterinary Medicine (Penn Vet). New findings by Dr. Kashina and colleagues have pointed to a surprising answer. The differing functions of these proteins are determined not by their amino acid sequences but by their genetic code. "We like to call it the 'silent code,'" Dr. Kashina said. "Our findings show that the parts of genes that we think of as being silent actually encode very key functional information." The researchers found that these "silent" differences in the nucleotide sequence seem to influence the density of ribosomes, the molecular machines that translate RNA into proteins. Such differences may enable each individual actin form to take on a different role in the cell. Dr. Kashina coauthored the work, published in the journal eLife, with Penn Vet's Pavan Vedula, Satoshi Kurosaka, Nicolae Adrian Leu, Junling Wang, Stephanie Sterling, and Dawei Dong and the National Institutes of Health's Yuri I. Wolf and Svetlana A. Shabalina. The article is titled “Diverse Functions of Homologous Actin Isoforms Are Defined by Their Nucleotide, Rather Than Their Amino Acid Sequence.” Actin is so ubiquitious and essential that it's known as a "housekeeping protein." It's the most abundant protein in most cells, and its different forms play roles during cell migration, muscle contraction, and development.
Login Or Register To Read Full Story
Login Register