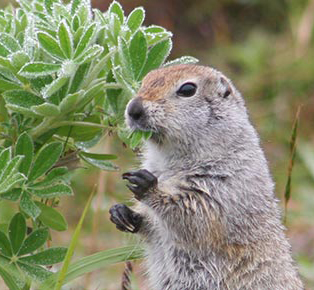 By feeding arctic ground squirrels special diets, researchers have found that omega-3 fatty acids, common in flax seed and fish oil, help keep the animals warmer in deep hibernation. In a University of Alaska Fairbanks-led study, researchers fed ground squirrels either a diet high in omega-3 fatty acids or a normal laboratory diet, and measured how the animals hibernated afterward. Researchers found that the omega-3 diet helped the animals hibernate a little warmer than normal without negatively affecting hibernation. The omega-3 diets also increased the amount of a heat-producing fat, called brown adipose tissue, the animals pack on. The discovery could add more understanding about how hibernation works and why animals eat certain types of foods. The study was published online on January 14, 2021 in Scientific Reports. The open-access article is titled “Omega 3 Fatty Acids Stimulate Thermogenesis During Torpor in the Arctic Ground Squirrel.” "Arctic ground squirrels have an innate ability to withstand harsh sub-zero temperatures for an incredible amount of time," says Monica Mikes, who at the time of the study was an undergraduate researcher at UAF and a scholar in the university's Biomedical Learning and Student Training program. Mikes, who also co-designed the study, noted that the animals are able to take their body temperature below freezing. How hibernators regulate body temperature has fascinated researchers for over a century. The type of fat they eat might have something to do with that. Recent studies have found that omega-3s can affect metabolism in non-hibernating animals. Because wild hibernators are known to eat diets rich in omega-3 foods, the researchers wanted to know if those animals benefited from eating those diets.
Login Or Register To Read Full Story
Login Register