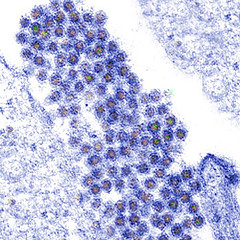 The first-ever comprehensive genomic analysis of the virus (image) that causes dengue fever suggests that it may survive year-round in southern China. The study, published online on October 12, 2015 in an open-access article in the American Journal of Tropical Medicine and Hygiene, provides evidence that China may be at increased risk for more frequent and severe dengue fever outbreaks similar to the 2014 outbreak in Guangdong Province (China) that sickened more than 40,000 people. The article is titled “Dengue in China: Comprehensive Phylogenetic Evaluation Reveals Evidence of Endemicity and Complex Genetic Diversity.” "We now have compelling evidence that dengue can persist in China--in some case, up to six to eight years," said Rubing Chen, Ph.D., an evolutionary virologist at the University of Texas Medical Branch, Galveston, and lead investigator of the study. "Further, we found a surprisingly complex and diverse mix of viral subtypes represented in China, a factor that can mean greater risk of epidemic dengue in the future." Researchers have disagreed about whether dengue persists in China between disease outbreaks. Several recent studies suggested that dengue remains an imported disease in China, but these studies used small datasets. The current study provides one of the most extensive analyses to date, according to Dr. Chen, and could be a critical tool in adjusting dengue prevention and control efforts to protect millions of people in China. Dengue fever, a viral disease first recognized during outbreaks in the 1950s, is spreading rapidly as the range of the mosquitoes Aedes aegypti and Aedes albopictus that transmit it expands throughout the world.
Login Or Register To Read Full Story
Login Register