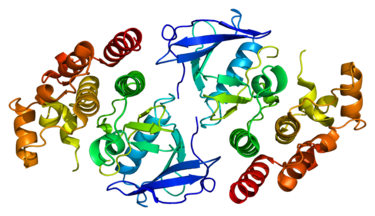 It starts off small, just a skin blemish. The most common moles stay just that way -- harmless clusters of skin cells called melanocytes, which give us pigment. In rare cases, what begins as a mole can turn into melanoma, the most serious type of human skin cancer because it can spread throughout the body. Scientists are using powerful supercomputers to uncover the mechanism that activates cell mutations found in about 50 percent of melanomas. The scientists say they're hopeful their study can help lead to a better understanding of skin cancer and to the design of better drugs. In 2002, scientists found a link between skin cancer and mutations of B-Raf (Rapidly Accelerated Fibrosarcoma) kinase (image), a protein that's part of the signal chain that starts outside the cell and goes inside to direct cell growth. This signal pathway, called the Ras/Raf/Mek/Erk kinase pathway, is important for cancer research, which seeks to understand out-of-control cell growth. According to the study, approximately 50 percent of melanomas have a specific single mutation on B-Raf, known as the valine 600 residue to glutamate (V600E). B-Raf V600E thus became an important drug target, and specific inhibitors of the mutant were developed in the following years. The drugs inhibited the mutant, but something strange happened. Paradoxically, quieting the mutant had a down side. It activated the un-mutated, wild-type B-Raf protein kinases, which again triggered melanoma. "With this background, we worked on studying the structure of this important protein, B-Raf," said Yasushi Kondo, PhD, a postdoctoral researcher in the John Kuriyan Lab at UC Berkeley.
Login Or Register To Read Full Story
Login Register