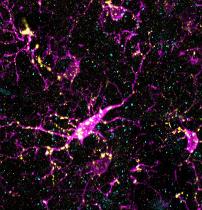 Excessive activity of an immune system gene (C4) previously linked to schizophrenia reproduces neural and behavioral aspects of the disease in mice, according to a new study published online on January 14, 2020 in the open-access journal PLOS Biology and authored by Dr. Ashley Comer and Dr. Alberto Cruz-Martín of Boston University and colleagues. The article is titled “Increased Expression of Schizophrenia-Associated Gene C4 Leads to Hypoconnectivity of Prefrontal Cortex and Reduced Social Interaction.” The finding provides mechanistic support for the importance of this gene in the development of schizophrenia, and may offer a new avenue for therapy development. Genetic variants that increase the activity of the C4 gene, which encodes part of the immune system's so-called "complement" cascade, have previously been shown to increase risk for schizophrenia in large genome-wide association studies (GWAS). However, the mechanism through which such variants might contribute to the emergence of schizophrenia have not been clear because C4 has not previously been experimentally overexpressed. During normal brain development, it's known that complement sticks to neuronal synapses and attracts microglia (immune cells in the brain), which engulf synaptic material in the process known as "synaptic pruning." When mis-regulated, this process can lead to abnormal connectivity in the brain. Loss of synapses in the prefrontal cortex is a hallmark of schizophrenia, which led the authors to ask whether an overactive C4 gene might contribute to development of schizophrenia through mis-regulation of complement-mediated synaptic pruning by microglia.
Login Or Register To Read Full Story
Login Register