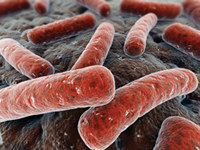 Working with lab cultures and mice, Johns Hopkins scientists have found that a strain of the common gut pathogen Bacteroides fragilis causes colon inflammation and increases activity of a gene called spermine oxidase (SMO) in the intestine. The effect is to expose the gut to hydrogen peroxide – the caustic, germ-fighting substance found in many medicine cabinets -- and cause DNA damage, contributing to the formation of colon tumors, say the scientists. "Our data suggest that the SMO gene and its products may be one of the few good targets we have discovered for chemoprevention," says Dr. Robert Casero, professor of oncology at the Johns Hopkins Kimmel Cancer Center. In a study, Casero and his colleagues introduced B. fragilis to two colon cell lines and measured SMO gene activity. In both cell lines, SMO gene activity increased two to four times higher than in cells not exposed to the bacteria. The scientists also observed similar increases in enzymes produced by the SMO gene. The scientists successfully prevented DNA damage in these cells by blocking SMO enzyme activity with a compound called MDL 72527. The Johns Hopkins team also tested their observations in a mouse model, created by Hopkins infectious disease specialist Dr. Cynthia Sears to develop colon tumors. Mice exposed to the bacteria had similar increases in SMO. Mice treated with MDL 72527 had far fewer tumors and lower levels of colon inflammation than untreated mice. Results of the experiments were published on September 13, 2011 in the Proceedings of the National Academy of Sciences. Dr. Casero says hydrogen peroxide can freely distribute through and into other cells. "It roams around, and can damage the DNA in cells," he says. Rising levels of hydrogen peroxide and DNA damage in the colon are clear steps to tumor development, says Dr.
Login Or Register To Read Full Story
Login Register