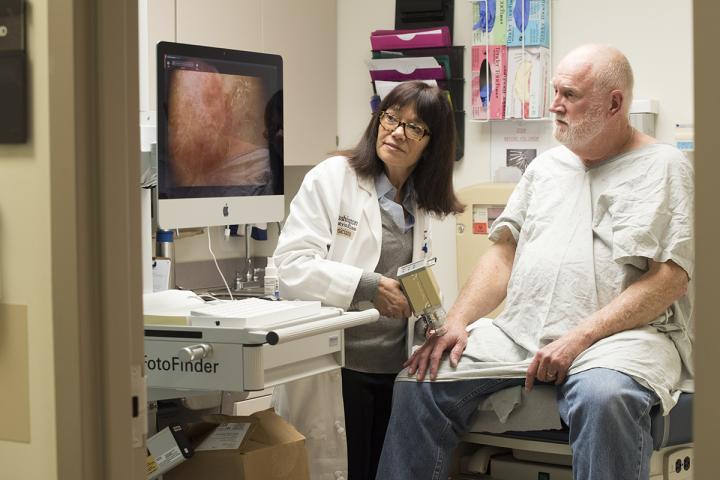 A combination of two topical drugs that have been in use for years triggers a robust immune response against precancerous skin lesions, according to a new study. The research, from the Washington University School of Medicine in St. Louis and the Harvard Medical School, shows that the therapy activates the immune system's T cells, which then attack the abnormal skin cells. The study, which involved patients with actinic keratosis, a precursor to a type of skin cancer called squamous cell carcinoma, is published was published online on November 21, 2016 in The Journal of Clinical Investigation. The open-access article is titled “Randomized Trial of Calcipotriol Combined with 5-Fluorouracil for Skin Cancer Precursor Immunotherapy.” "We looked at precancerous lesions on patients with sun-damaged skin," said Washington University dermatologist and study co-author Lynn A. Cornelius, M.D., Director of the Division of Dermatology. "Most commonly found on the face, scalp and arms, these lesions appear abnormal by visual examination and under the microscope but are not full-blown skin cancers. But because these lesions have the potential to develop into a true skin cancer, they are commonly treated. Our study shows this combination therapy is more effective and better tolerated than current treatment practices." On average, the investigational therapy reduced the number of precancerous skin lesions on the face by almost 88 percent compared with a 26 percent reduction using the standard chemotherapy. While some side effects such as skin scaling and itching were similar with both treatments, patients receiving the investigational therapy reported more redness and increased burning sensations, which are consistent with the immune response it triggers.
Login Or Register To Read Full Story
Login Register