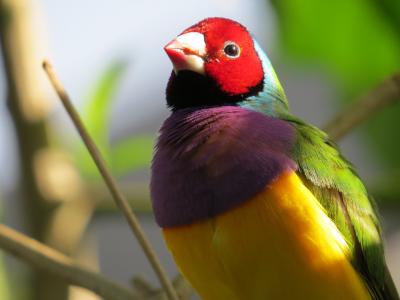 In the world of bird fashion, the guys seem to have all the fun: brighter feathers, sharper accessories, more pizzazz. Researchers going back to Charles Darwin have focused on the contrast between the sexes, attributing the males' brighter colors to their need to attract mates. A group of researchers at University of Wisconsin-Milwaukee took a different approach, testing a hypothesis that evolution has actually resulted in similarities among the sexes as much as differences. Looking at nearly 1,000 species of birds, they found that while males often have brighter feathers than females, the two sexes have come closer together in color over time to blend into their surroundings and hide from predators. Natural selection - during migration, breeding in subtropical locales, and care of young - is as powerful as sexual selection. "Although most studies of bird plumage focus on dichromatism, evolutionary change has most often led to similar, rather than different, plumage in males and females," the authors write. Dr. Peter Dunn and Dr. Linda Whittingham, Professors of Biological Sciences at UW-Milwaukee, wrote the paper with Jessica Armenta, a former UW-Milwaukee graduate student who now teaches at Austin Community College in Texas. "Our study shows that ecology and behavior are driving the color of both sexes, and it is not due to sexual selection," they write. The open-access article, "Natural and Sexual Selection Act on Different Axes of Variation in Avian Plumage Color," was published online on March 27, 2015 in Science Advances. Ms. Armenta spent four years collecting data from 977 species of birds from six museums in the U.S. and Australia. She looked at six birds of each species, three males and three females. Dr. Dunn and Dr. Whittingham analyzed the data, assigning each bird a color score based on scales of brightness and hue.
Login Or Register To Read Full Story
Login Register