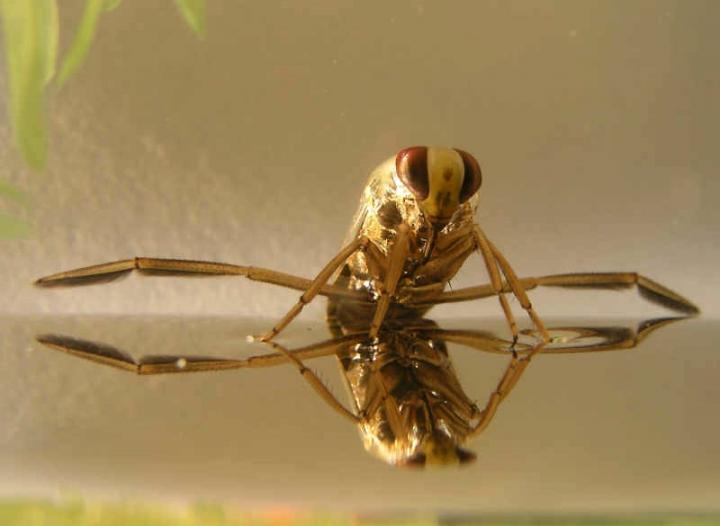 Mosquitoes continue to build resistance to existing pesticides. Research has now shown that the chemical substances emitted by one of the mosquito's natural enemies - the backswimmer (photo) - makes the biological pesticide Bti more deadly. These so-called predator cues also impair the mosquito's immune system. Scientists at KU Leuven (University of Leuven), Belgium, argue that a cocktail of biological pesticides and synthetic predator cues very well be the future of mosquito control. Mosquitoes transmit quite a few deadly diseases, including West Nile virus. Around the world, therefore, the fight against these insects is high on the agenda. Existing strategies for mosquito control often involve the use of pesticides that harm the environment. These pesticides are increasingly less effective as well, as insects can become resistant to existing products relatively quickly. Biopesticides are a possible alternative. The most commonly used biological pesticide is the Bacillus thuringiensis israelensis (Bti) bacteria. Unfortunately, mosquitoes are already developing a resistance to this pesticide as well. This means the dose of Bti must be increased to kill mosquitoes, so that this biological substance, too, is beginning to harm the environment. Under the supervision of Professor Robby Stoks, KU Leuven doctoral student Lin Op de Beeck set out to find a new strategy in the fight against mosquitoes. "We already knew that chemical substances emitted by the backswimmer - a natural enemy of mosquito larvae in the water - trigger a stress response in mosquitoes. This stress response, in turn, suppresses the mosquito's immune system," says Op de Beeck. "Scientists have recently found a way to produce a synthetic version of these chemical substances known as predator cues.
Login Or Register To Read Full Story
Login Register