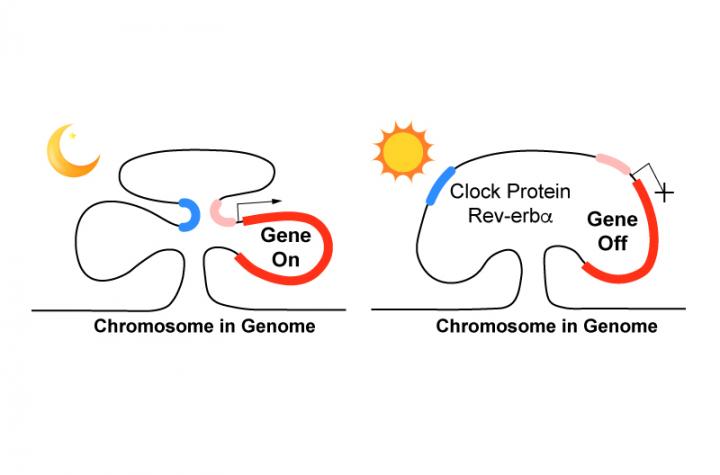 It is well known that the human body functions on a 24-hour, or circadian, schedule. The up-and-down daily cycles of a long-studied clock protein called Rev-erb coordinates the ebb and flow of gene expression by tightening and loosening loops in chromosomes, according to new research from the Perelman School of Medicine at the University of Pennsylvania. The findings were published online on February 8, 2018 in Science. The article is titled “Rev-erbα Dynamically Modulates Chromatin Looping to Control Circadian Gene Transcription.” Over the last 15-plus years, a team led by the new study's senior author Mitchell A. Lazar, MD, PhD, Director of Penn's Institute for Diabetes, Obesity, and Metabolism, has been teasing out the versatile role of Rev-erb in maintaining daily cycles of the body's molecular clock, metabolism, and even brain health. "Many studies, including this one, point to a link between the human internal clock and such metabolic disorders as obesity and diabetes," Dr. Lazar said. "Proteins such as Rev-erb are the gears of the clock and understanding their role is important for investigating these and many other diseases." Human physiology works on a 24-hour cycle of gene expression (when the chromosome coding region is translated by RNA and then transcribed to make protein) and is controlled by the body's molecular clock. Core clock proteins activate or repress protein complexes that physically loop one part of a chromosome to become adjacent to a distant part of the same chromosome. The Penn team showed that daily oscillations of Rev-erb control gene expression in the mouse liver via interactions between on-and-off regions on the same chromosome.
Login Or Register To Read Full Story
Login Register