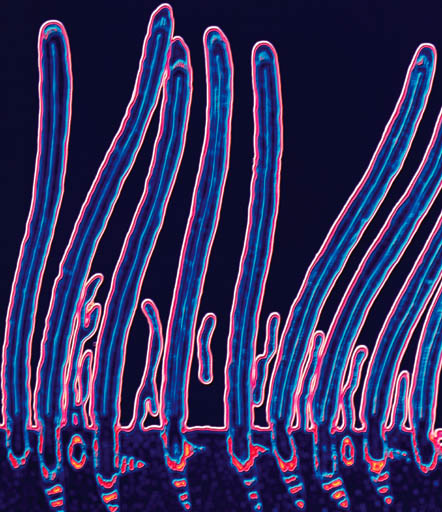 A team of scientists from Johns Hopkins and other institutions report that restoring tiny, hair-like structures to defective cells in the olfactory system of mice is enough to restore a lost sense of smell. The results of the experiments were published online on September 2, 2012 in Nature Medicine, and are believed to represent the first successful application of gene therapy to restore this function in live mammals. An expert in olfaction, Randall Reed, Ph.D., professor of molecular biology and genetics and co-director of the Center for Sensory Biology at the Johns Hopkins Institute for Basic Biomedical Sciences, cautions that researchers are still years away from applying the same therapy in people, and that if and when it comes, it will likely be most effective for those who suffer from anosmia (lack of smell) due to inherited genetic disorders. “But our work has already contributed to a better understanding of the cellular factors involved in anosmia, and that will give us insights into other neurological disorders, as well,” he says. The mice used in the current study carried a genetic mutation that destroyed the production of a protein critical for the functioning of cilia in the cells responsible for smell, called olfactory sensory neurons. These specialized cells each display several of the protruding, hair-like structures that contain receptors for odorants. Without functional cilia, the cells become a broken link in the chain of events necessary for proper odor detection in the environment, the researchers explained. Beginning with a common cold virus, which readily infects the cells of the nasal cavity, researchers replaced some of the viral genes with a corrected version of the defective cilia gene.
Login Or Register To Read Full Story
Login Register