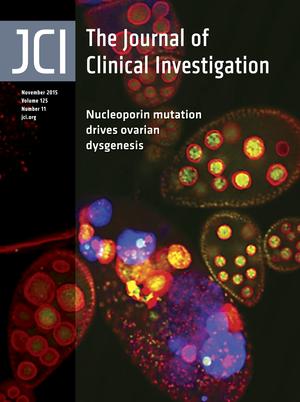 In the open-access cover story of the November issue of the Journal of Clinical Investigation (first published online on October 20, 2015), scientists at the Hebrew University of Jerusalem Faculty of Medicine, together with colleagues at other institutions in Israel, announced a discovery that will allow doctors to diagnose a disease causing infertility and lack of puberty in women, and potentially to develop new treatment options. The characterization of the nucleoporin 107 (Nup107) gene and discovering its function in ovarian development will provide a greater understanding of how signaling between the cytoplasm and the nucleus is uniquely involved in ovarian development. On a medical level, it will allow the diagnosis of both patients and carriers of the disease, as well as prenatal diagnosis and prevention of this difficult morbidity of lack of puberty and infertility. Potentially, it could also lead to a method of treatment for problems of infertility and premature ovarian failure. The research paper was accompanied by a special commentary written by two world-renowned experts in the fields of Drosophila and human reproductive systems. The research article is titled “A Mutation in the Nucleoporin-107 Gene Causes XX Gonadal Dysgenesis.” The commentary is titled “Poreless Eggshells.” The mammalian ovary functions, not only as the reproductive organ that contains the germ cells (oocytes) responsible for creating the next generation, but also as a hormonal gonad (reproductive gland) regulating many aspects of female physiology and development. Very little is known about the processes involved in the development of the ovary and the egg. To date, only a few genes have been identified as important in ovarian development, and any findings in this area are of great importance with regard to the fields of infertility and fertility.
Login Or Register To Read Full Story
Login Register