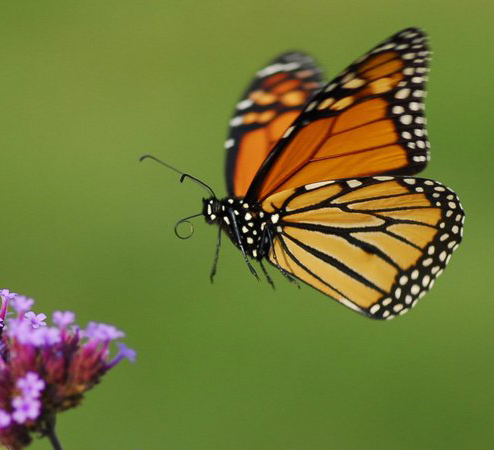 The fluttery flight of butterflies has so far been something of a mystery to researchers, given their unusually large and broad wings relative to their body size. Now researchers at Lund University in Sweden have studied the aerodynamics of butterflies in a wind tunnel. The results suggest that butterflies use a highly effective clap technique, therefore making use of their unique wings. This helps them rapidly take off when escaping predators. The study explains the benefits of both the wing shape and the flexibility of their wings. The Lund researchers studied the wingbeats of freely flying butterflies during take-off in a wind tunnel. During the upward stroke, the wings cup, creating an air-filled pocket between them. When the wings then collide, the air is forced out, resulting in a backward jet that propels the butterflies forward. The downward wingbeat has another function: the butterflies stay in the air and do not fall to the ground. The wings colliding was described by researchers almost 50 years ago, but it is only in this new study that the theory has been tested on real butterflies in free flight. Until now, the common perception has been that butterfly wings are aerodynamically inefficient, however, the researchers suggest that the opposite is actually true. The new study was published online on January 20, 2021 in the Journal of the Royal Society. The open access article is titled “Butterflies Fly Using Efficient Propulsive Clap Mechanism Owing to Flexible Wings.” (Links to videos are provided below.) “That the wings are cupped when butterflies clap them together, makes the wing stroke much more effective. It is an elegant mechanism that is far more advanced than we imagined, and it is fascinating.
Login Or Register To Read Full Story
Login Register