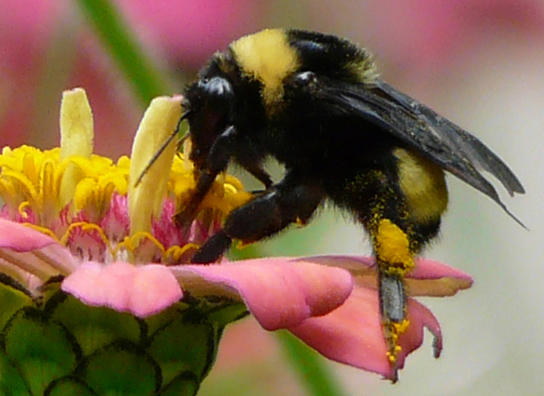 It is well known that bumblebees and other pollinators can tell the difference between plants that will provide them with nectar and pollen and those that will not. However, until now, little has been known about how the arrangement of flowers affects the pollinators’ decision-making. Researchers from the School of Biological and Chemical Sciences at Queen Mary University of London, taught bumblebees to distinguish between two visually clearly different feeder types, one type contained food, while the other did not. The researchers found that bees were able to quickly learn the feeder types containing food when the feeders were arranged horizontally. However, the bees failed to distinguish these feeder types when they were distributed vertically on a wall and significantly more often chose the wrong feeder type. The results were published online on March 6, 2015 in Behavioral Ecology. The article is titled “Bumblebees Utilize Floral Cues Differently on Vertically and Horizontally Arranged Flowers.” The researchers are certain that the bees were equally able to discriminate between the two presented feeders in both arrangements, but simply chose not to waste the brain power doing so on vertically arranged feeders. They believe that this is because in a meadow typically rewarding and unrewarding flowers of different species grow side-by-side and bees benefit from visiting only flowers similar to the ones that have previously rewarded them. In contrast, vertically clustered flowers, such as on flowering bushes or trees, the flowers in the arrangement are typically the same and paying close attention to the flower features may not be needed. Dr Stephan Wolf, co-author of the research, said: “This is a rare example of a pollinator being able to tell the difference between different flowers, but simply choosing not to do so.
Login Or Register To Read Full Story
Login Register