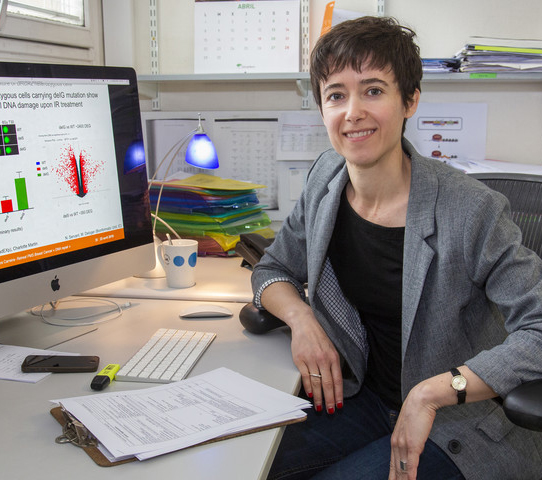 The BRCA2 protein, produced by the expression of the tumor suppressor gene BRCA2, plays an important role in DNA repair by homologous recombination, which takes place at early phases of the cell cycle. A team from Institut Curie, in collaboration with a group of CEA, revealed an additional role of BRCA2 in the alignment of chromosomes during mitosis (cell division), with significant consequences on chromosome stability. Published in Nature Communications, these results could explain certain chromosomal aberrations observed in BRCA2-mutated tumors. The “Genome Instability and Cancer Predisposition” Team (https://science.institut-curie.org/research/biology-chemistry-of-radiations-cell-signaling-and-cancer-axis/umr3348-genotoxic-stress-and-cancer/team-carreira/team-members/) led by Aura Carreira (photo), PhD, in the “Genome integrity, RNA and Cancer” Unit (CNRS/Paris-Saclay University/Institut Curie) is working on the role of BRCA2 in maintaining genome integrity. It was already known that BRCA2 operates in DNA repair by homologous recombination, the DNA duplication phase of the cell cycle. In addition, it was also known that a mutation in the BRCA2 gene predisposes to breast and ovarian cancer. In collaboration with the group of Sophie Zinn-Justin, PhD, at the CEA, Dr. Carreira’s team found an additional and unexpected role of BRCA2 in mitosis, which seems uncoupled to its function in DNA repair. Using a combination of biophysics, biochemistry, cell biology, and genetics tools, these researchers showed that the alignment of chromosomes at the metaphase plate depends on the phosphorylation of BRCA2 by the protein kinase PLK1 (polo-like kinase 1). Importantly, they found that certain BRCA2 variants identified in breast cancer patients were associated with this function during mitosis being altered.
Login Or Register To Read Full Story
Login Register