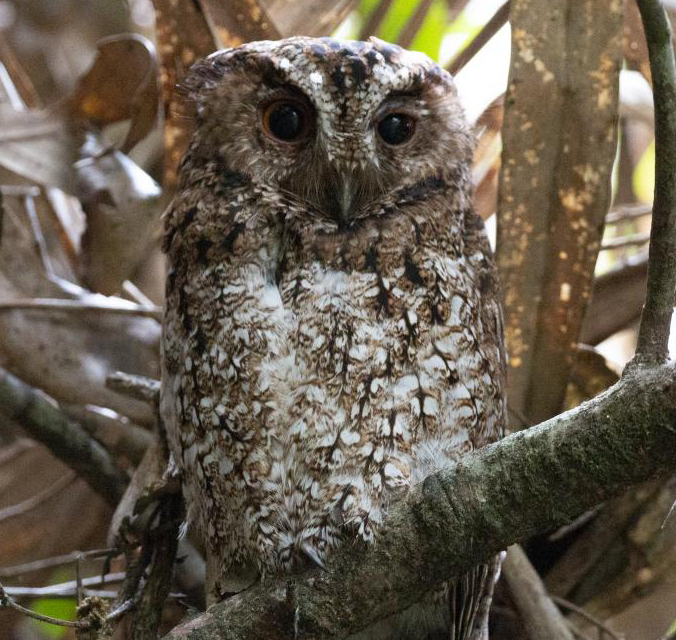 The Bornean subspecies of Rajah scops owl (Otus brookii brookii) (photo) documented in the wild for the first time since 1892, may be its own unique species and deserving of a conservation designation. In an article published online on April 28, 2021 in The Wilson Journal of Ornithology, Smithsonian Migratory Bird Center ecologist Andy Boyce, PhD, reported the rediscovery and photographed this elusive subspecies in the mountainous forests of Mount Kinabalu in Sabah, Malaysia. "It was a pretty rapid progression of emotions when I first saw the owl--absolute shock and excitement that we'd found this mythical bird, then pure anxiety that I had to document it as fast as I could," Dr. Boyce said. "Based on size, eye color, and habitat, I knew it was the Bornean Rajah scops owl. What's more, taking into account this bird's specific plumage characters, known speciation patterns within the Otus genus, and phylogeographic patterns of montane birds in Borneo and Sumatra, O. b. brookii is likely its own unique species and further study is needed." Scops owls weigh approximately 100 grams (about 4 ounces), equivalent to four AA batteries. Both subspecies of Rajah scops owl are native to southeast Asia--Otus brookii brookii on the island of Borneo and Otus brookii solokensis on Sumatra. Small owls in the genus Otus often show rapid divergence following isolation in this region. In fact, the Indonesian archipelago is composed of islands that facilitate species divergence, and Borneo and Sumatra have been particularly prone to speciation events.
Login Or Register To Read Full Story
Login Register