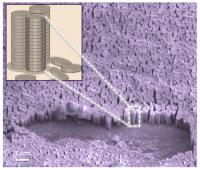 Using a bio-mimicking analog of one of nature's most efficient light-harvesting structures, blades of grass, an international research team led by Dr. Alejandro Briseno, of the University of Massachusetts (U Mass) Amherst, has taken a major step in developing long-sought polymer architecture to boost power-conversion efficiency of light to electricity for use in electronic devices. Dr. Briseno, with colleagues and graduate students at U Mass Amherst and others at Stanford University and Dresden University of Technology, Germany, reported online on September 16, 2014 in Nano Letters that by using single-crystalline organic nanopillars, or "nanograss," they found a way to get around dead ends, or discontinuous pathways, that pose a serious drawback when using blended systems known as bulk heterojunction donor-acceptor, or positive-negative (p-n), junctions for harvesting energy in organic solar cells. Dr. Briseno's research group is one of very few in the world to design and grow organic single-crystal p-n junctions. He says, "This work is a major advancement in the field of organic solar cells because we have developed what the field considers the 'Holy Grail' architecture for harvesting light and converting it to electricity." The breakthrough in morphology control should have widespread use in solar cells, batteries, and vertical transistors, he adds. Dr. Briseno explains, "For decades scientists and engineers have placed great effort in trying to control the morphology of p-n junction interfaces in organic solar cells.
Login Or Register To Read Full Story
Login Register