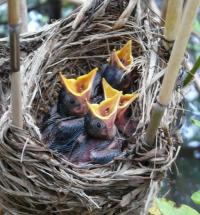 In the hunt for better knowledge on the aging process, researchers from Lund University in Sweden have now enlisted the help of small birds. A new study investigates various factors which affect whether chicks are born with long or short chromosome ends, called telomeres. The genetic make-up of our cells consists of genes lined up on chromosomes. The ends of the chromosomes are called telomeres, and they protect the chromosomes from sticking to each other. The longer the telomeres, the longer time the chromosomes are able to function. And conversely, the shorter these ends, the less time left for the chromosomes, and therefore also less time for the cells to function properly. More knowledge of telomeres can therefore be valuable in understanding the aging process in humans and other animals. In the present study, published online on December 10, 2014 in an open-access article in the Proceedings of the Royal Society B, researchers from Lund University looked for explanations for the large variation in telomere length in newborn individuals. This is curious because it should be advantageous to start life with longer telomeres rather than shorter telomeres. "It is remarkable that already, so early on in life, there are already such major differences between individuals, both in humans and in animals," says Dr. Asghar Muhammad, one of the researchers behind the study. The researchers used data from a 30-year-long study of individually recognizable ringed great reed warblers at Lake Kvismaren, south Central Sweden. The aim of the study was to find out which inheritance factors affect the length of the chromosome ends in chicks. Thanks to the long series of measurements, it was possible to compare the length of telomeres in newborn individuals with that of their parents when these were newly hatched chicks.
Login Or Register To Read Full Story
Login Register