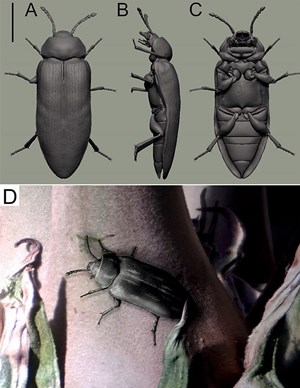 He’s Australian, around half a centimeter long, fairly nondescript, 300 million years old – and he’s currently causing astonishment among both entomologists and paleontologists. The discovery of a beetle from the late Permian period (299 million to 251 million years ago), when even the dinosaurs had not yet appeared on the scene, is throwing a completely new light on the earliest developments in this group of insects. The reconstruction and interpretation of the characteristics of the beetle “Ponomarenkia belmonthensis” were achieved by Professor Dr. Rolf Georg Beutel and Dr. Evgeny V. Yan of Friedrich Schiller University Jena (Germany). They have published this discovery, together with renowned beetle researcher Dr. John Lawrence and Australian geologist Dr. Robert Beattie, online on Juy 21, 2017 in the Journal of Systematic Palaeontology. It was Dr. Beattie who discovered the only two known fossilized specimens of the beetle in former marshland in Belmont, Australia. The article is titled “At the Dawn of the Great Rise: Ponomarenkia belmonthensis (Insecta: Coleoptera), A Remarkable New Late Permian Beetle from the Southern Hemisphere.” “Beetles, which, with nearly 400,000 described species today, make up almost one-third of all known organisms, still lived a rather shadowy and cryptic existence in the Permian period,” explains Jena zoologist Dr. Beutel.
Login Or Register To Read Full Story
Login Register