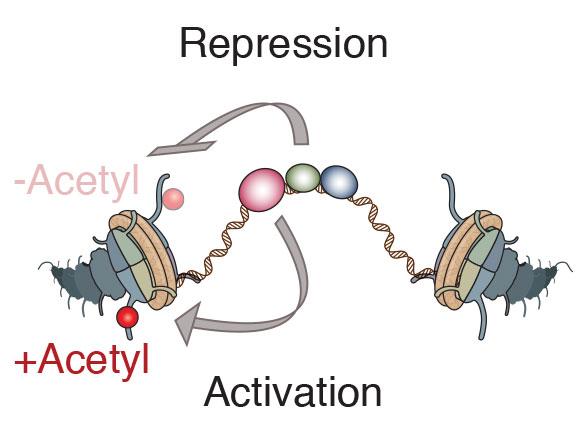 The complex process regulating gene expression is often compared to following a recipe. Miss a genetic ingredient, or add it in the wrong order, and you could have a disaster on your hands. New research from the Stowers Institute for Medical Research in Kansas City suggests the process may be more like a battle between two opposing genetic forces rather than a step-wise assembly of ingredients. In their report, published online on November 14, 2016 in Genome Research, Stowers researchers examined regions of fruit fly DNA, called enhancers, which increase the likelihood of gene expression. The open-access article is titled “Drosophila Poised Enhancers Are Generated During Tissue Patterning with the Help of Repression.” Gene expression is the process of turning genes on or off, and is crucial for creating specific cells in the body such as nerve cells or cells that make up skin and bone. But a duel comes first. Stowers Associate Investigator Julia Zeitlinger, Ph.D., and Postdoctoral Research Associate Nina Koenecke, Ph.D., discovered that DNA enhancers engage in an ongoing contest between activation and repression, which results in a different epigenetic state of the histone proteins around which DNA is wrapped. Activation sparks the addition of acetyl groups to histones, which in turn loosen their grip on DNA enhancers, allowing them to be switched on. Repression, on the other hand, removes this acetylation mark and prevents the switch from ever being flipped. "Through this balance between forces you can shift an enhancer more easily from inactivity to activity," Dr. Zeitlinger says. Enhancer activation and repression are known to occur both in the fruit fly Drosophila melanogaster and in mammals. But repression is much less studied in mammals.
Login Or Register To Read Full Story
Login Register