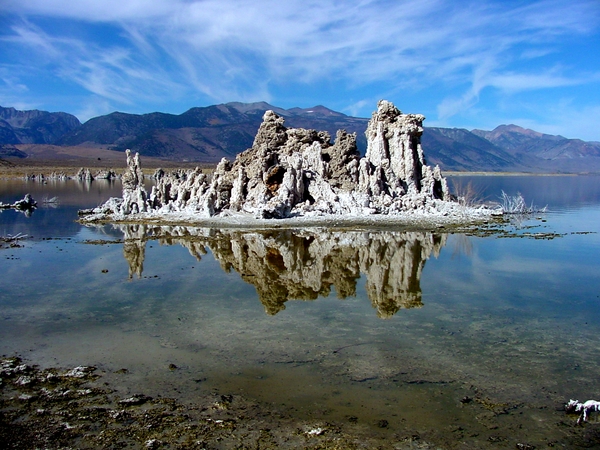 Buried deep in the mud along the banks of a remote salt lake near Yosemite National Park are colonies of bacteria with an unusual property: they breathe a toxic metal to survive. Researchers from the University of Georgia discovered the bacteria on a recent field expedition to Mono Lake (image) in California, and their experiments with this unusual organism show that it may one day become a useful tool for industry and environmental protection. The bacteria use elements that are notoriously poisonous to humans, such as antimony and arsenic, in place of oxygen, an ability that lets them survive buried in the mud of a hot spring in this unique saline soda basin. "Just like humans breathe oxygen, these bacteria respire poisonous elements to survive," said Chris Abin, co-author of a paper describing the research published in the January 7, 2014 issue of Environmental Science & Technology and a doctoral candidate in microbiology. "It is particularly fond of arsenic, but it uses other related elements as well, and we think it may be possible to harness these natural abilities to make useful products out of different elements." Antimony, for example, is a naturally occurring silver-colored metal that is widely used by numerous industries to make plastics, vulcanized rubber, flame retardants, and a host of electronic components including solar cells and LEDs. To make these products, antimony must be converted into antimony trioxide, and this bacterium is capable of producing two very pure types of crystalline antimony trioxide perfectly suited for industry. Traditional chemical methods used to convert antimony ore into antimony trioxide can be expensive, time-consuming, and often create harmful byproducts.
Login Or Register To Read Full Story
Login Register