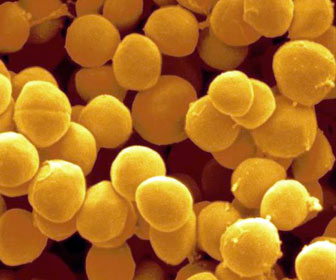 When they are not busy attacking us, germs go after each other. But when viruses invade bacteria, it doesn't always spell disaster for the infected microbes: sometimes viruses actually carry helpful genes that a bacterium can harness to, say, expand its diet or better attack its own hosts. Scientists have assumed the bacterial version of an immune system would robotically destroy anything it recognized as invading viral genes. However, new experiments at Rockefeller University have now revealed that one variety of the bacterial immune system known as the CRISPR-Cas system can distinguish viral foe from viral friend. And, the researchers report, in a paper published online on August 31, 2014 in Nature, the bacterial system does so by watching for one particular cue. "Transcription — an initial step in the process that reads genes, including those of viruses — makes the difference," says researcher Dr. Luciano Marraffini, head of Rckefeller University’s Laboratory of Bacteriology. "The full genome of viruses in their lytic, or destructive phase, is transcribed. Meanwhile, a few of the genes from a virus are transcribed during its lysogenic, or dormant phase." Viruses in their lytic phase make copies of themselves using a cell's machinery before destroying the cell to liberate these new viruses. Viruses in their lysogenic phase, meanwhile, quietly integrate into a host's genetic material. And this is where they offer their potential benefit to the bacteria, which co-opt viral genes for their own ends. In fact, some disease-causing microbes, such as the bacterium responsible for diphtheria, must pick up the right virus in order to attack humans. Scientists have only discovered this adaptive bacterial immune system relatively recently.
Login Or Register To Read Full Story
Login Register