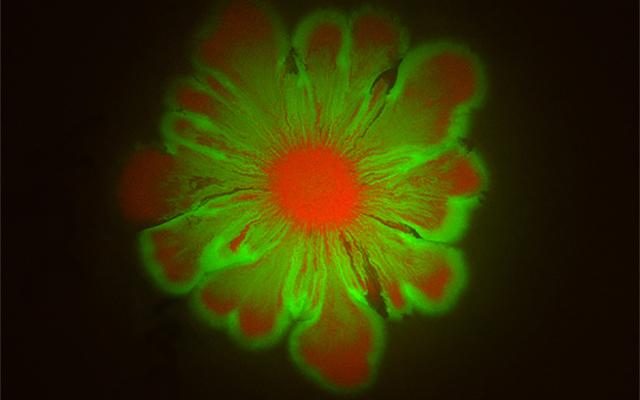 Microbial communities inhabit every ecosystem on Earth, from soil to rivers to the human gut. While monoclonal cultures often exist in labs, in the real world, many different microbial species inhabit the same space. Researchers at the University of California (UC) San Diego have discovered that when certain microbes pair up, stunning floral patterns emerge (see photo here and below). In a paper published online on January 14 in eLife, a team of researchers at UC San Diego's BioCircuits Institute (BCI) and Department of Physics, led by Research Scientist and BCI Associate Director Lev Tsimring, PhD, reports that when non-motile E. coli (Escherichia coli) are placed on an agar surface together with motile A. baylyi (Acinetobacter baylyi), the E. coli "catch a wave" at the front of the expanding A. baylyi colony. The agar provided food for the bacteria and also a surface on which E. coli couldn't easily move (making it non-motile). A. baylyi, on the other hand, can crawl readily across the agar using microscopic legs called pili. Thus, a droplet of pure E. coli would barely spread over a 24-hour period, while a droplet of pure A. baylyi would cover the entire area of the petri dish. Yet when the E. coli and A. baylyi were mixed together in the initial droplet, both strains flourished and spread across the whole area as the non-motile E. coli hitched a ride on the highly mobile A. baylyi. However, what most surprised researchers were intricate flower-like patterns that emerged in the growing colony over a 24-hour period.The open-access eLife article is titled “Flower-like patterns in multi-species bacterial colonies.
Login Or Register To Read Full Story
Login Register