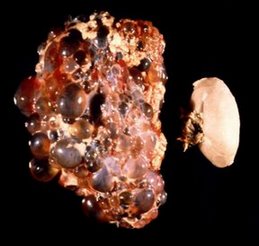 Scientists at the University of California-Santa Barbara (UCSB) and the University of Toronto have discovered that patients with an inherited kidney disease may be helped by a drug that is currently available for other uses. The findings were published online on October 24, 2011 in the Proceedings of the National Academy of Sciences. Over 600,000 people in the United States, and 12 million worldwide, are affected by the inherited kidney disease known as autosomal-dominant polycystic kidney disease (ADPKD). The disease is characterized by the proliferation of thousands of cysts that eventually debilitate the kidneys, causing kidney failure in half of all patients by the time they reach age 50. ADPKD is one of the leading causes of renal failure in the United States. "Currently, no treatment exists to prevent or slow cyst formation, and most ADPKD patients require kidney transplants or lifelong dialysis for survival," said Dr. Thomas Weimbs, director of the laboratory at UCSB where the discovery was made. Dr. Weimbs is an associate professor in the Department of Molecular, Cellular and Developmental Biology, and in the Neuroscience Research Institute at UCSB. Recent work in the Weimbs laboratory has revealed a key difference between kidney cysts and normal kidney tissue. They found that the STAT6 signaling pathway –– previously thought to be mainly important in immune cells –– is activated in kidney cysts, while it is dormant in normal kidneys. Cystic kidney cells are locked in a state of continuous activation of this pathway, which leads to the excessive proliferation and cyst growth in ADPKD. The drug leflunomide, which is clinically approved for use in rheumatoid arthritis, has previously been shown to inhibit the STAT6 pathway in cells.
Login Or Register To Read Full Story
Login Register