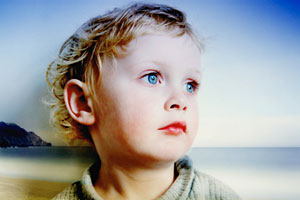 Maternal inflammation during early pregnancy may be related to an increased risk of autism in children, according to new findings supported by the National Institute of Environmental Health Sciences (NIEHS), part of the National Institutes of Health. Researchers found this in children of mothers with elevated C-reactive protein (CRP), a well-established marker of systemic inflammation. The risk of autism among children in the study was increased by 43 percent among mothers with CRP levels in the top 20th percentile, and by 80 percent for maternal CRP in the top 10th percentile. The findings appeared online on January 22, 2013 in the journal Molecular Psychiatry and add to mounting evidence that an overactive immune response can alter the development of the central nervous system in the fetus. "Elevated CRP is a signal that the body is undergoing a response to inflammation from, for example, a viral or bacterial infection," said the lead scientist on the study, Alan Brown, M.D., professor of clinical psychiatry and epidemiology at Columbia University College of Physicians and Surgeons, New York State Psychiatric Institute, and Mailman School of Public Health. "The higher the level of CRP in the mother, the greater the risk of autism in the child." Dr. Brown cautioned that the results should be viewed in perspective because the prevalence of inflammation during pregnancy is substantially higher than the prevalence of autism. "The vast majority of mothers with increased CRP levels will not give birth to children with autism," Dr. Brown said.
Login Or Register To Read Full Story
Login Register