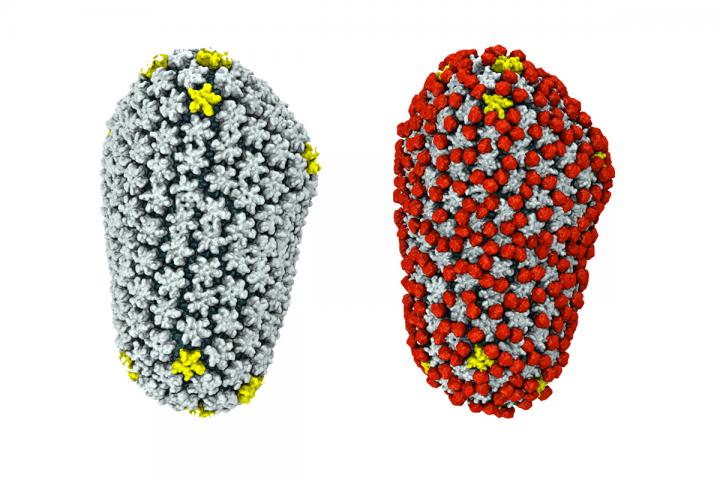 A new study offers the first atomic-scale view of an interaction between the HIV capsid - the protein coat that shepherds HIV into the nucleus of human cells - and a host protein known as cyclophilin A. This interaction is key to HIV infection, researchers say. A paper describing the research was published on March 4, 2016 in the journal Nature Communications. The open-acess article is titled “Cyclophilin A Stabilizes the HIV-1 Capsid Through a Novel Non-Canonical Binding Site” Cyclophilin A is found in most tissues of the human body, where it plays a role in the inflammatory response, immunity. and the folding and trafficking of other proteins. When it fails to work properly or is overproduced in cells, cyclophilin A also can contribute to diseases such as rheumatoid arthritis, asthma, cancer, and cardiovascular disease. It also facilitates some viral infections, including HIV. "We have known for some time that cyclophilin A plays a role in HIV infection," said University of Illinois physics professor Klaus Schulten, who led the new study with postdoctoral researcherJuan R. Perilla and University of Pittsburgh professor Peijun Zhang and postdoctoral researcher Chuang Liu. The HIV capsid somehow tricks this cellular protein into providing cover for it as it transits through the cell and makes its way to the nucleus, Dr. Schulten said. Once there, the capsid interacts with a nuclear pore that offers an entrance to the cell's nucleus. The virus uses the pore as a channel to inject its genetic material into the nucleus and commandeer the cell. Studies in cell culture have found that the virus rarely makes it to the nucleus without its cyclophilin disguise. Drugs that interfere with cyclophilin also reduce HIV infections in cell culture. Such drugs cannot be used in human HIV patients because they dampen the immune response.
Login Or Register To Read Full Story
Login Register