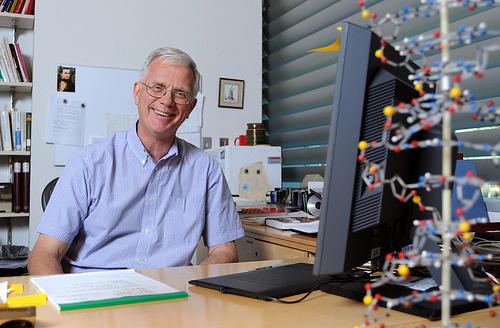 A team of scientists from Arizona State University's Biodesign Institute and IBM's T.J. Watson Research Center has developed a prototype DNA reader that could make whole-genome profiling an everyday practice in medicine. "Our goal is to put cheap, simple, and powerful DNA and protein diagnostic devices into every single doctor's office," said Dr. Stuart Lindsay (photo), an ASU physics professor and director of Biodesign's Center for Single Molecule Biophysics. Such technology could help usher in the age of personalized medicine, where information from an individual's complete DNA and protein profiles could be used to design treatments specific to their individual makeup. The report was published online on November 7, 2014 in ACS Nano. Such game-changing technology is needed to make genome sequencing a reality. The current hurdle is to do so for less than $1,000, an amount for which insurance companies are more likely to provide reimbursement. In their latest research breakthrough, the team fashioned a tiny, DNA reading device a thousands of times smaller than the width of a single human hair. The device is sensitive enough to distinguish the individual chemical bases of DNA when they are pumped past the reading head. Proof-of-concept was demonstrated, by using solutions of the individual DNA bases, which gave clear signals sensitive enough to detect tiny amounts of DNA (nanomolar concentrations), even better than today's state-of-the-art, so-called next-generation DNA sequencing technology. Making the solid-state device is similar to making a sandwich, just with ultra-high-tech semiconductor tools used to slice and stack the atomic-sized layers of meats and cheeses like the butcher shop's block.
Login Or Register To Read Full Story
Login Register