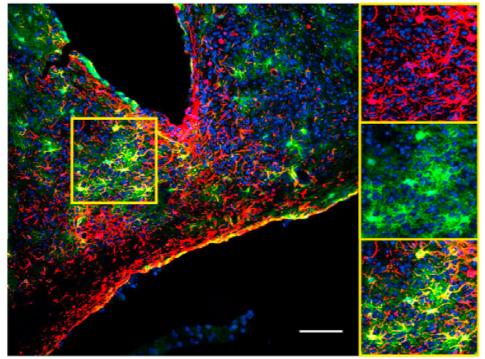 Until recently, work on biological clocks that dictate daily fluctuations in most body functions, including core body temperature and alertness, focused on neurons, those electrically excitable cells that are the divas of the central nervous system. Asked to define the body's master clock, biologists would say it is two small spheres -- the suprachiasmatic nuclei, or SCN -- in the brain that consist of 20,000 neurons. The scientists likely wouldn't even mention the 6,000 astroglia mixed in with the neurons, said Erik Herzog, Ph.D., a neuroscientist in Arts & Sciences at Washington University in St. Louis. In a March 23, 2017 advance online publication from Current Biology (“Astrocytes Regulate Daily Rhythms in the Suprachiasmatic Nucleus and Behavior”), Dr. Herzog and his collaborators show that the astroglia help to set the pace of the SCN to schedule a mouse's day. The astroglia, or astrocytes, were passed over in silence partly because they weren't considered to be important. Often called "support cells," they were supposed to be gap fillers or place holders. Their Latin name, after all, means "starry glue." Then two things happened. Scientists discovered that almost all the cells in the body keep time, with a few exceptions such as stem cells. And they also began to realize that the astrocytes do a lot more than they had thought. Among other things, astrocytes secrete and slurp neurotransmitters and help neurons form strengthened synapses to consolidate what we've learned. In fact, scientists began to speak of the tripartite synapse, emphasizing the role of an astrocyte in the communication between two neurons. So, for a neuroscientist like Dr. Herzog, the obvious question was: What were the astrocytes doing in the SCN? Were they keeping time?
Login Or Register To Read Full Story
Login Register