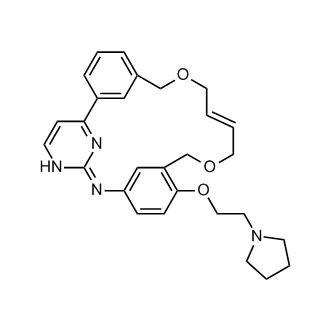 Use of the targeted agent pacritinib (image) significantly reduced the symptoms and burden of advanced myelofibrosis in patients, says a Mayo Clinic researcher who co-led PERSIST-1, the worldwide phase III clinical trial that tested the therapy. Specifically, pacritinib substantially reduced severe enlargement of the spleen, a typical feature of advanced myelofibrosis, in more than 20 percent of patients and alleviated debilitating side effects in more than 46 percent of patients. Investigators further found that pacritinib could be used safely in patients with myelofibrosis who have thrombocytopenia, a life-threating loss of blood platelets that can lead to deadly bleeding. The only currently approved therapy for myelofibrosis -- ruxolitinib -- is not recommended in patients who have severe thrombocytopenia. Ruben A. Mesa, M.D., Chair of Hematology and Medical Oncology at the Mayo Clinic in Arizona, will present these results at a press conference held during the 2015 American Society of Clinical Oncology (ASCO) annual meeting in Chicago, May 29 through June 2. “Use of pacritinib can alleviate the burden and diminish the suffering that this cancer causes,” says Dr. Mesa. “For many of the patients who used it, pacritinib is a very good drug. The agent was significantly superior to other medical treatments. It is too early to know if pacritinib has an impact on survival, but that is clearly our expectation,” he adds. Mayo researchers led by Dr. Mesa were also part of a phase II trial that found pacritinib offered significant benefit in treating the disorder. Myelofibrosis is a chronic bone-marrow disorder that can lead to lowering of blood counts, scarring in the bone marrow, severe symptoms, and enlargement of the spleen.
Login Or Register To Read Full Story
Login Register