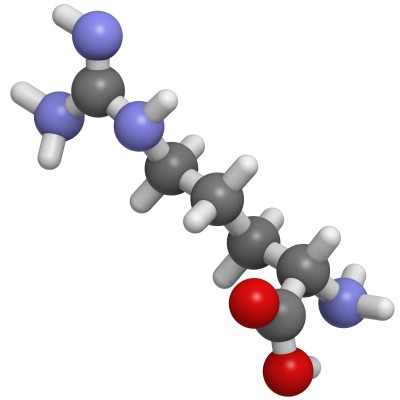 Increasingly, evidence supports the idea that the immune system, which protects our bodies from foreign invaders, plays a part in Alzheimer's disease. But the exact role of immunity in the disease is still a mystery. A new Duke University study in mice suggests that in Alzheimer's disease, certain immune cells that normally protect the brain begin to abnormally consume an important nutrient: arginine (image). Blocking this process with a small-molecule drug prevented the characteristic brain plaques and memory loss in a mouse model of the disease. Published in the April 15, 2015 issue of the Journal of Neuroscience, the new research not only points to a new potential cause of Alzheimer's, but also may eventually lead to a new treatment strategy. The article is titled “"Arginine Deprivation and Immune Suppression in a Mouse Model of Alzheimer's Disease." "If indeed arginine consumption is so important to the disease process, maybe we could block it and reverse the disease," said senior author Dr. Carol Colton, Professor of Neurology at the Duke University School of Medicine, and a member of the Duke Institute for Brain Sciences. The brains of people with Alzheimer's disease show two hallmarks, “plaques” and “tangles,” that researchers have puzzled over for some time. Plaques are the build-up of sticky proteins called beta amyloid, and tangles are twisted strands of a protein called tau. In the current study, the scientists used a type of mouse, called CVN-AD, that they had created several years ago by swapping out a handful of important genes to make the animal's immune system more similar to a human's. Compared with other mice used in Alzheimer's research, the CVN-AD mouse has it all: plaques and tangles, behavior changes, and neuron loss.
Login Or Register To Read Full Story
Login Register