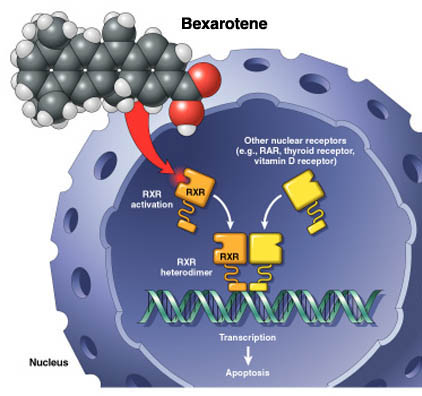 Neuroscientists at Case Western Reserve University School of Medicine have made a dramatic breakthrough in their efforts to find a cure for Alzheimer's disease. The researchers' findings, published online on February 9, 2012 in Science, show that use of a drug in mice appears to quickly reverse the pathological, cognitive, and memory deficits caused by the onset of Alzheimer's. The results point to the significant potential that the medication, bexarotene, has to help the roughly 5.4 million Americans suffering from the progressive brain disease. Bexarotene has been approved for the treatment of cancer by the U.S. Food and Drug Administration for more than a decade. These experiments explored whether the medication might also be used to help patients with Alzheimer's disease, and the results were more than promising. Alzheimer's disease arises in large part from the body's inability to clear naturally-occurring amyloid beta from the brain. In 2008, Case Western Reserve researcher Dr. Gary Landreth, professor of neurosciences, discovered that the main cholesterol carrier in the brain, apolipoprotein E (ApoE), facilitated the clearance of the amyloid beta proteins. Dr. Landreth is the senior author of this Science study. Dr. Landreth and his colleagues chose to explore the effectiveness of bexarotene for increasing ApoE expression. The elevation of brain ApoE levels, in turn, speeds the clearance of amyloid beta from the brain. Bexarotene acts by stimulating retinoid X receptors (RXR), which control how much ApoE is produced. In particular, the researchers were struck by the speed with which bexarotene improved memory deficits and behavior even as it also acted to reverse the pathology of Alzheimer's disease.
Login Or Register To Read Full Story
Login Register