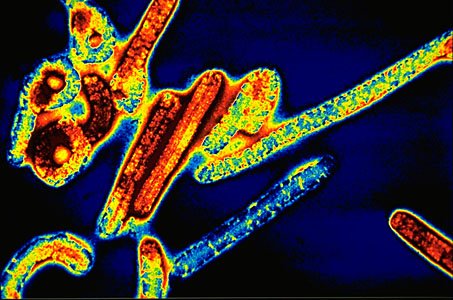 Researchers at the NIH and Oregon Health & Science University (OHSU) have found that an experimental vaccine elicits antibodies that can protect nonhuman primates from Ebola virus infection. Ebola virus causes severe hemorrhagic fever in humans and nonhuman primates, meaning that infection may lead to shock, bleeding, and multi-organ failure. According to the World Health Organization, Ebola hemorrhagic fever has a fatality rate of up to 90 percent. There is presently no licensed treatment or vaccine for Ebola virus infection. Several research groups have developed experimental vaccine approaches that protect nonhuman primates from Ebola virus and the closely related Marburg virus. These approaches include vaccines based on DNA, recombinant adenovirus, virus-like particles, and human parainfluenza virus 3. But how these vaccine candidates confer protection is an area that is still being explored: Do they activate immune cells to kill the invading virus? Or do they elicit antibodies that block infection? In the current study, scientists at NIH's National Institute of Allergy and Infectious Diseases and OHSU's Vaccine & Gene Therapy Institute built on earlier work with an experimental vaccine composed of an attenuated vesicular stomatitis virus carrying a gene that codes for an Ebola virus protein. They observed how cynomolgus macaques responded to a challenge of Ebola virus before and during treatment with the vaccine and in conjunction with depleted levels of immune cells. Their results showed that important immune cells—CD4+ T cells and CD8+ T cells—had a minimal role in providing protection, while antibodies induced by the vaccine appeared to be critical to protecting the animals.
Login Or Register To Read Full Story
Login Register