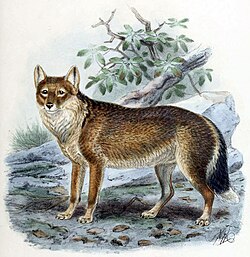 University of Adelaide researchers in Australia have found the answer to one of natural history's most intriguing puzzles – the origins of the now extinct Falkland Islands wolf and how it came to be the only land-based mammal on the isolated islands – 460 km from the nearest land, Argentina. Previous theories have suggested the wolf somehow rafted on ice or vegetation, crossed via a now-submerged land bridge, or was even semi-domesticated and transported by early South American humans. The 320-year-old mystery was first recorded by early British explorers in 1690 and raised again by Charles Darwin following his encounter with the famously tame species on his Beagle voyage in 1834. Researchers from the University's Australian Centre for Ancient DNA (ACAD) extracted tiny pieces of tissue from the skull of a specimen collected personally by Darwin. They also used samples from a previously unknown specimen, which was recently re-discovered as a stuffed exhibit in the attic of the Otago Museum in New Zealand. The findings were published online on March 5, 2013 in Nature Communications and concluded that, unlike what had been suggested by earlier theories, the Falkland Islands wolf (Dusicyon australis) only became isolated about 16,000 years ago around the peak of the last glacial period. "Previous studies used ancient DNA from museum specimens to suggest that the Falkland Islands wolf diverged genetically from its closest living relative, the South American maned wolf (Chrysocyon brachyurus) around seven million years ago. As a result, they estimated that the wolf colonized the islands about 330,000 years ago by unknown means," says Associate Professor Jeremy Austin, Deputy Director of ACAD and co-lead author with Dr. Julien Soubrier.
Login Or Register To Read Full Story
Login Register