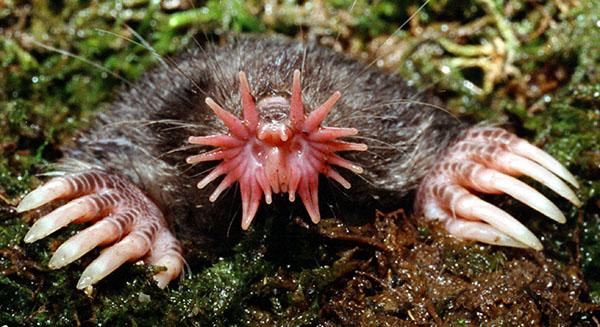 A quarter-century of research on the star-nosed mole has unearthed startling insights into the evolution of animal behavior and the limits of physiology. Kenneth Catania, Ph.D., of Vanderbilt University presented a new synthesis of remarkable anatomical findings about the star-nosed mole at the American Association of Anatomists annual meeting during the Experimental Biology 2017 meeting, being held April 22-26 in Chicago. "Star-nosed moles are truly amazing animals," said Dr. Catania, a neuroscientist who's interest in the creature was first piqued while working as an undergraduate research assistant at the National Zoo in Washington, D.C. "Obviously they are among the weirdest looking creatures on the planet. But when I began trying to understand the star, the mole's brain organization, and its behavior--that's when things got really surprising." They eat faster than any other mammal on Earth: Star-nosed moles can identify and eat food (bugs, mostly) in less than two-tenths of a second, taking a mere 8 milliseconds to decide whether an item is edible or not. They perform this feat in part due to the extremely efficient operation of their nervous systems, which convey information from the environment to the animal's brain at speeds approaching the physiological limit of neurons. It also helps tha their star is the most sensitive known touch organ in any mammal.
Login Or Register To Read Full Story
Login Register