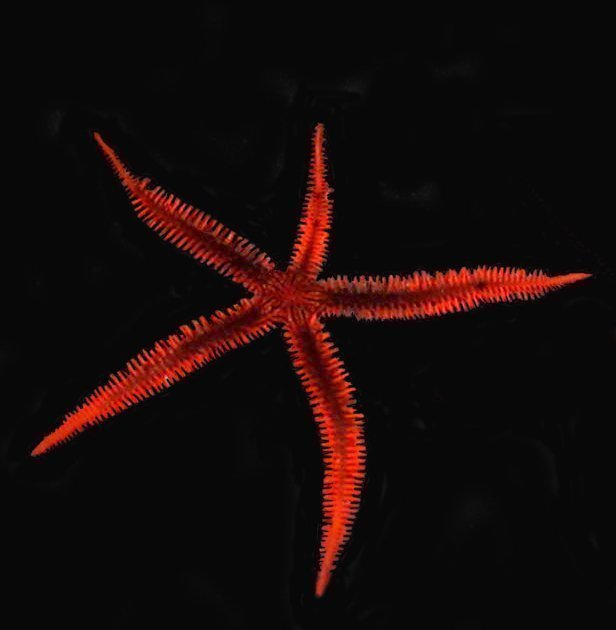 Scientists have shown for the first time that brittle stars use vision to guide them through vibrant coral reefs, thanks to an unusual color-changing trick. The international team, led by researchers at Oxford University Museum of Natural History, described a new mechanism for vision in the red brittle star Ophiocoma wendtii, a relative to sea stars and sea urchins, which lives in the bright and complex reefs of the Caribbean Sea. The team’s findings were published online on January 2, 2020 in Current Biology. The open-access article is titled “Extraocular Vision in a Brittle Star Is Mediated by Chromatophore Movement in Response to Ambient Light.” This species first captured scientific attention more than 30 years ago thanks to its dramatic change in color between day and night and its strong aversion to light. Recently, researchers demonstrated that O. wendtii was covered in thousands of light-sensitive cells, but the exact behaviors these cells control remained a mystery. The new research shows that O. wendtii is able to see visual stimuli, and that its signature color-change might play an important role in enabling vision. Lauren Sumner-Rooney, PhD, a research fellow at Oxford University Museum of Natural History who studies unusual visual systems, has been working with Ophiocoma for several years at the Smithsonian Tropical Research Institute in Panama and the Museum für Naturkunde in Berlin. Alongside team members from the Museum für Naturkunde, Lund University (Sweden), and the Georgia Institute of Technology (USA), Dr. Sumner-Rooney ran hundreds of behavioral experiments to test the brittle stars' “eyesight.”
Login Or Register To Read Full Story
Login Register