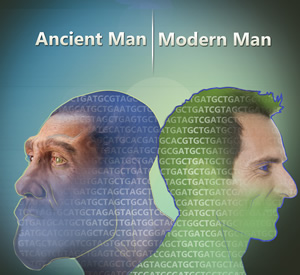 A genome by itself is like a recipe without a chef--full of important information, but in need of interpretation. So, even though we have sequenced genomes of our nearest extinct relatives--the Neanderthals and the Denisovans--there remain many unknowns regarding how differences in our genomes actually lead to differences in physical traits. "When we're looking at archaic genomes, we don't have all the layers and marks that we usually have in samples from present-day individuals that help us interpret regulation in the genome, like RNA or cell structure," said David Gokhman, PhD, a postdoctoral fellow in biology at Stanford University. "We just have the naked DNA sequence, and all we can really do is stare at it and hope one day we'd be able to understand what it means," he said. Motivated by such hopes, a team of researchers at Stanford and the University of California, San Francisco (UCSF), have devised a new method to harvest more information from the genomes of archaic humans to potentially reveal the physical consequences of genomic differences between us and them. Their work, published online on April 22, 2021 in eLife, focused on sequences related to gene expression--the process by which genes are activated or silenced, which determines when, how, and where DNA's instructions are followed. Gene expression tends to be the genetic detail that determines physical differences between closely related groups. The open-access eLife article is titled “The Cis-Regulatory Effects of Modern Human-Specific Variants” (https://elifesciences.org/articles/63713).
Login Or Register To Read Full Story
Login Register