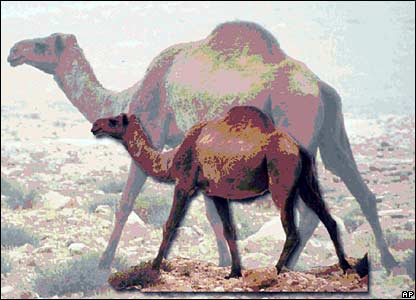 A research team led by the Canadian Museum of Nature has identified the first evidence for an extinct giant camel in Canada's High Arctic. The discovery is based on 30 fossil fragments of a leg bone found on Ellesmere Island, Nunavut, part of the Canadian Arctic Archipelago, and represents the most northerly record for early camels, whose ancestors are known to have originated in North America some 45 million years ago. The fossils were collected over three summer field seasons (2006, 2008, and 2010) and are about three and a half million years old, dating from the mid-Pliocene Epoch. Other fossil finds at the site suggest this High Arctic camel lived in a boreal-type forest environment, during a global warm phase on the planet. The research, by Natalia Rybczynski, Ph.D., and co-authors including John Gosse, Ph.D. (at Dalhousie University, Halifax, Nova Scotia), and Mike Buckley, Ph.D. (at the University of Manchester, UK), was described online on March 5, 2013 in an open-access article in Nature Communications. "This is an important discovery because it provides the first evidence of camels living in the High Arctic region," explains Dr. Rybczynski, a vertebrate palaeontologist with the Canadian Museum of Nature, who has led numerous field expeditions in Canada's Arctic. "It extends the previous range of camels in North America northward by about 1200 km, and suggests that the lineage that gave rise to modern camels may have been originally adapted to living in an Arctic forest environment." The camel bones were collected from a steep slope at the Fyles Leaf Bed site, a sandy deposit near Strathcona Fiord on Ellesmere Island. Fossils of leaves, wood, and other plant material have been found at this site, but the camel is the first mammal recovered.
Login Or Register To Read Full Story
Login Register