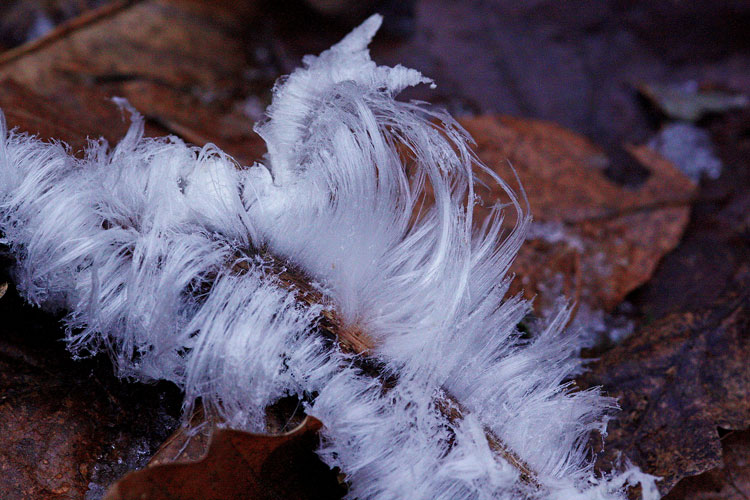 You may have never seen or heard of it, but hair ice - a type of ice that has the shape of fine, silky hairs and resembles white candy floss - is remarkable. It grows on the rotten branches of certain trees when the weather conditions are just right, usually during humid winter nights when the air temperature drops slightly below 0°C. Now, a team of scientists in Germany and Switzerland has identified the missing ingredient that gives hair ice its peculiar shape: namely the fungus Exidiopsis effusa. The research was published online today (July 22, 2015) in Biogeosciences, an open-access journal of the European Geosciences Union (EGU). The article is titled “Evidence for Biological Shaping of Hair Ice.” "When we saw hair ice for the first time on a forest walk, we were surprised by its beauty," says Dr. Christian Mätzler from the Institute of Applied Physics at the University of Bern in Switzerland. "Sparked by curiosity, we started investigating this phenomenon, at first using simple tests, such as letting hair ice melt in our hands until it melted completely." Then Dr. Mätzler, a physicist, joined forces with a chemist (Dr. Diana Hofmann) and a biologist (Dr. Gisela Preuß) in Germany. Inspired by earlier work, and by photographs of hair ice sent in from various countries, the team performed a set of experiments to figure out just what conditions are needed to grow this type of ice and what its properties are. In the process, they confirmed a 100-year-old theory for the origin of hair ice. Dr. Alfred Wegener, of tectonic-plate fameand originator of the Continental Drift theory, was the first to study hair ice. In 1918, he noticed a whitish cobwebby coating on the surface of hair-ice-bearing wood, which his assistant identified as fungus mycelium - the mass of thin threads from where mushrooms grow. Dr.
Login Or Register To Read Full Story
Login Register